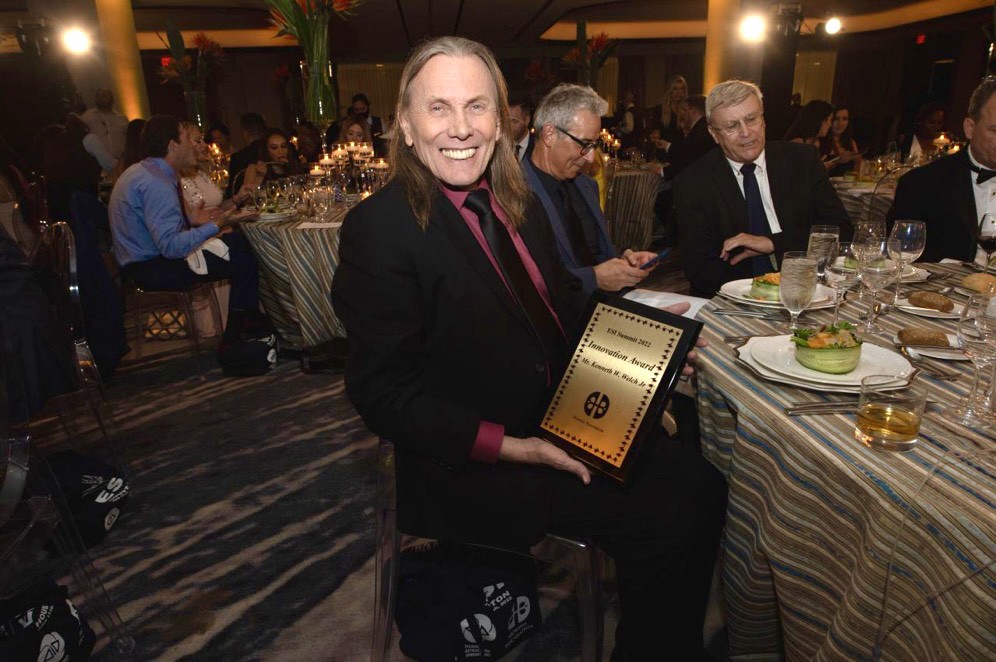 Mr. Kenneth W. Welch Jr. prolific inventor, president, and CEO of SeaDog Systems, Inc. was presented the “Inventor of the Year Award” at the ESI Summit.

Mr. Kenneth W. Welch Jr. prolific inventor, founder, chairman, president, and CEO of Global Oceanic Designs/SeaDog Systems, Inc. was presented the “Inventor of the Year Award” for the most impactful invention benefiting humanity at the Inaugural Energy, Sustainability, and Infrastructure (ESI) Summit. “The award is meant to recognize the inventors behind impactful technologies for mankind, and we saw no one more deserving as the first recipient than Mr. Welch,” says Daniel de Castellane, Founder of Henosis Foundation.

This award marks another milestone in an already successful and highly merited career stretching back over the last 5 decades.

Dedicated to the creation of a brighter future, Mr. Welch has made it his life’s work to develop new systems of energy that can unshackle us from fossil fuels with long-lasting grid-scale technology that can fulfill the needs of communities around the world. Fascinated by water from a young age, Mr. Welch has spent his long career in the pursuit of using the natural wave forces of the ocean to provide clean energy that works alongside our planet and not against it.

The “Hydro-power Nexus”; uses water to create power, whether tidal, wave, current, river, etc., it employs systems utilizing the undulating currents/flows or waves that then create mechanical or hydroelectric power.

Mr. Welch’s breakthrough innovation, via a pump to power a series of pistons to develop a seamless supply of energy, was developed to produce a clean and powerful mechanical device using abundant ocean waves. With this goal in mind, Mr. Welch developed the “SeaDog Energy Stalling Device”.

Using materials that have a life expectancy of at least 80 years before major replacement, was the goal. A system that could be patented under a wave pump design originally called the “SeaDog Wave Pump” in addition to a new technology also patented by Global Oceanic Designs, Inc. originally named the “Fulcrum Pond Pounder” for producing waves in a pond using 1/10th of the energy of other comparable wave generating devices. These combined systems created a breakthrough direction of bringing the wave to shore, with a stable base foundation generating wave energy cost-effectively on land, without the need of the ocean, and a “New Energy Nexus” was created, one called a Dam-Free Wave Energy System, which allows for the energy produced from the new Nexus, at a grid-scale level.

Its secondary purpose is to act as a desalination platform with the express mission statement of providing clean drinking water to communities in need, both urban and rural. The successful demonstration of its capabilities has it poised to enter the market within the coming year as the next step forward in our energy ecosystem.

Always focused on moving forward, the wave energy conversion systems that Mr. Welch has developed over the years have compounded to his current technology breakthrough.

The current state of our energy ecosystem as it stands cannot withstand the mass adoption of green technologies that can ably serve the majority of consumers. If the vision of green energy as a total replacement for fossil fuels is to be realized, infrastructure investment and development at a grand scale are required.

When most of those resources are spent not on revolutionizing but instead are aimed at repairing and replacing technology with short lifespans, the realization of that vision is pushed far down the pipeline. The New Hydropower Nexus, presented by Diamond Infrastructure Development, Inc., the technology’s license holder, is the next step towards realizing that vision of an energy system they see as being “fully sustainable, clean, and ethically sourced”.

Described by Kenneth W. Welch Jr. as his life’s work, the Henosis Foundation bestowed the “Inventor of the Year” accolade to Mr. Welch during the summit for “his ingenuity and years-long dedication to our planet”. The foundation also announced the “Kenneth W. Welch Jr. Scholarship” at the award ceremony to help finance the development of the inventors of the next generation to “carry the torch forward” and “create a better world that we may be lucky enough to see realized in our lifetimes”.

Our current practices make it nearly impossible to produce, transport or consume energy without significant environmental impact. It’s time that we invest in a system that would move our economy, people, and planet in a positive direction of growth and innovation through “Dam-free Hydropower” while stepping away from the control and deficit systems being presented currently in the alternative energy sector. Mr. Welch’s technology is paving the path going forward while supporting a 20-year infrastructure vision.

This revolutionary “Grid-Scale, Dam-Free Power Pond Installation” is the next step in the on-shore Wave Energy Water & Power Delivery System, bringing wave energy to shore, above or beneath the land, eliminating the need for dams, water towers, or pumping sub-stations anymore! The only thing required for tomorrow’s future when it comes to energy is a pond full of water, joined with “Global Oceanic’s Fulcrum Wave Maker”, along with “SeaDog’s Energy Stalling Device” the “Ultimate Breakthrough in Fusion Extraction”!

The Summit, held in Houston from June 17th to the 19th, 2022, brought together some of the finest minds in energy, industry, and finance to unveil Mr. Welch’s vision to the public to take the first steps toward transforming our energy infrastructure. The weekend hosted technical presentations by Georg Engelmann, CEO of Diamond Infrastructure Development, and musical performances by world-renowned performers Benedetta Caretta and Jackie Evancho, along with a “mystery guest”.